I have been taking my Persian class for almost two months now, and I have finally learned to do one important thing — read and write! 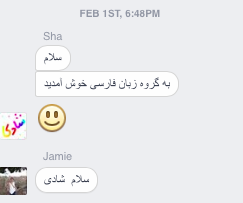 (upper left: a simplified version of the alphabet; all other photos: screenshots from my computer and our teacher’s Persian Facebook message thread — the 3 short messages written on 12:33 pm took me almost an hour to write!)

I originally intended to update this blog every couple weeks with the exciting new things I have been learning. However, because my class only meets for a few hours a week, in the two months we have been learning, we have almost exclusively focused on the Persian alphabet. Only now that everyone in the class can read and write decently have we been able to move on to other things, though most of us still struggle to read fluently.

My only other experience learning a non-Roman alphabet language was Korean Hangul, a brilliantly simple writing system designed by a team of 15th-century Korean linguists to bring literacy to the common man (before Hangul, Korean was written in Chinese characters, meaning only privileged, mostly male aristocrats could read and write). Thanks to Hangul’s orthographic simplicity, one could learn the entire alphabet in a matter of mere hours or days depending on motivation. I personally learned the alphabet the day before I flew to Korea for an English teaching job, a not uncommon story amongst expats there.

While Korean is a more difficult language than Persian for native romance language-speakers to learn, I was surprised to find Persian’s writing system to be relatively complex. Persian letters do not have a one-to-one phoneme-to-letter ratio. In fact, the /z/ sound has four different orthographic representations in written Persian. Of course, I’m aware that English is the worst for inconsistency and difficulty in spelling, and I ultimately think that these past two months have been an important exercise in appreciating how tough it can be to master a complex and incredibly different writing system from the one(s) you grew up with. I have many fellow ESL/EFL instructor friends who, like me, speak only French and/or Spanish as their second language, and I think we’d all do well to study more non-Romance, non-Roman alphabet languages in order to better understand and empathize with our students from radically different language backgrounds.

Plus, you get to order cute keyboard stickers for your laptop. Who doesn’t want that? 😉

One thought on “الفبا (The Alphabet)”